Examples of Sustainable Development in Stockholm and Malmo

Day 2 in Copenhagen and thankfully Jeff has given us the day off. This past week we made the move from Stockholm to Malmo and now Copenhagen. Traveling with such a large group can be really stressful but as long as everyone is a little flexible, things usually turn out alright. We haven’t had any major complications yet. I am writing this from the banks of Emil Holms Canal which runs through Copenhagen University’s Humanities campus but posting it one day later because the internet at the hostel has been spotty to say the least.

We’ve had a lot of great lectures, tours, and presentations to understand what sustainability is and see first hand how it is being applied in Northern European cities. With a little time to ourselves, I have had a chance to reflect on what I’ve learned the first two weeks of the trip.

Social equity is studied the least and is the hardest to implement due to political difficulties and a lack of metrics. However, developments in both Stockholm and Malmo are making conscious efforts to make their communities more equitable. To make housing more affordable, the city requires that the residential buildings in these developments be high-density with the option to rent or buy a range of units at various price points. The developments are well-connected to transit, meaning owning a car is not a limiting factor to living in the community. In Stockholm, the Hammarby Sjöstad district has a tram running down the primary thoroughfare which connects to a city subway line. 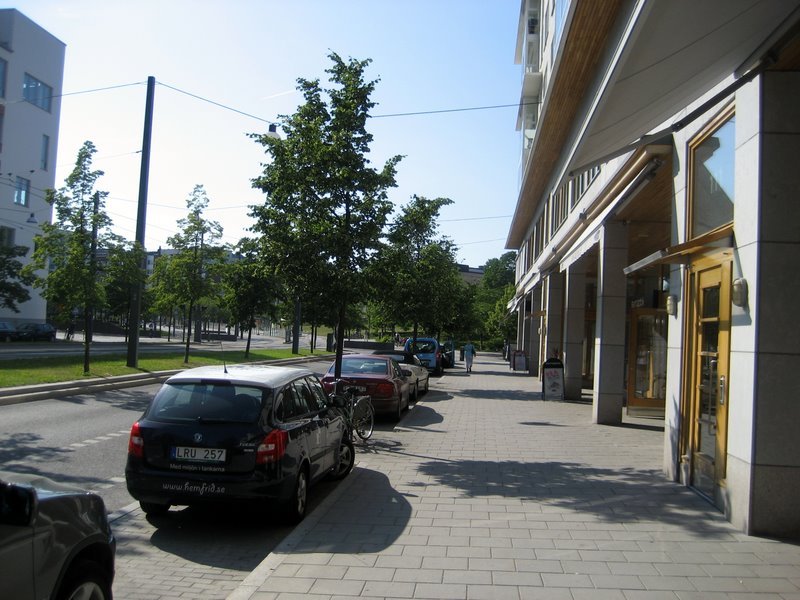 Via this connection, residents can be in the center of downtown in less than 15 minutes. Currently under construction on the outskirts of central Stockholm, the Royal Seaport will have dedicated bike paths connecting it to downtown so residents can quickly and safely ride directly into the city. In these projects, almost all of the parking is located under buildings. What would have been asphalt parking lots is used for parks, bike lanes, walking paths, playgrounds, and other public spaces. Developments promote shared public spaces and interconnected meeting areas so residents feel a sense of community with their neighbors. 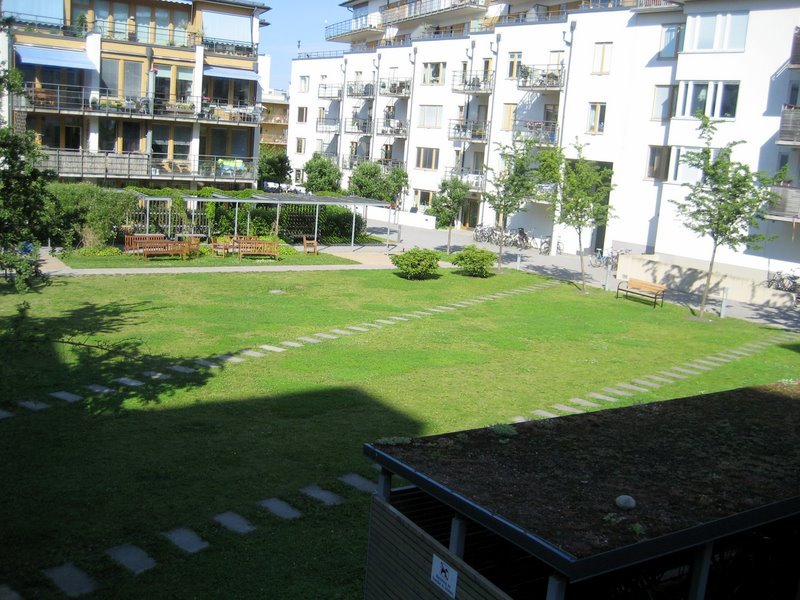 Almost all of the projects we’ve looked at are the result of redeveloping vacant industrial properties (brownfield sites). Since Stockholm is growing by about 30,000 people per year, the city is focusing their development efforts in 14 such areas within the inner city in an effort to reduce sprawl. Malmo has done the same with the Western Harbor project. The cities own the land and pay for the environmental cleanup of the site and the installation of critical infrastructure like roads, sewage, water, and district heating. 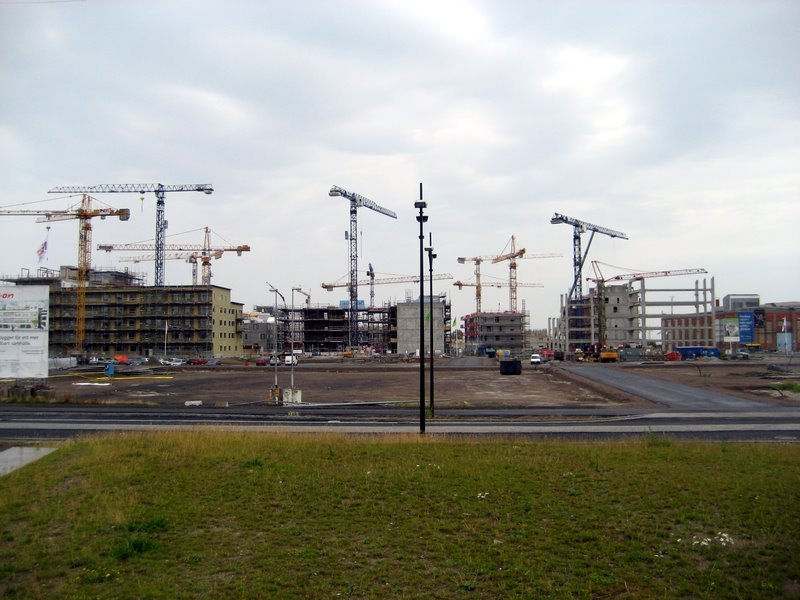 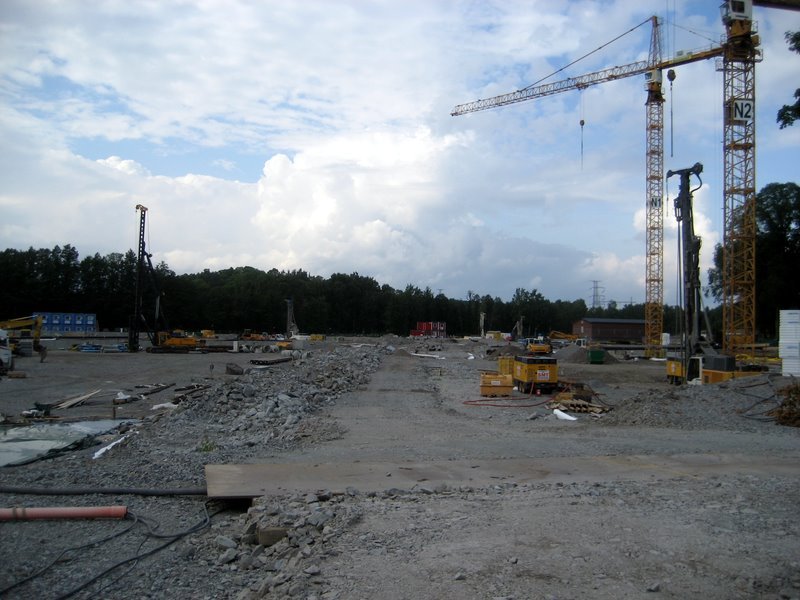 As a result, the city has a lot of say when it comes to deciding what actually gets built. They require mixing commercial and residential uses in each development. The bottom floors of buildings on major thoroughfares are dedicated to businesses. This is to ensure important services like schools and grocery stores are all accessible by walking. A group of my classmates studied the accessibility of Hammarby Sjöstad and found that all major services were located within a 5 minute walk from a random sample of apartments. Planners also make an effort to build office buildings as part of the development so jobs are located near residents. Cities cannot guarantee jobs for residences in nearby business but at least the option is there. All of these examples promote economic development and ensure new areas of the city are self-sufficient.

Technologically, the projects we looked at in Stockholm and Malmo are more advanced than anything I have seen in the US. This is primarily due to a system of integrated city services which minimize environmental impacts while maximizing the energy content of waste products like garbage and wastewater. In Stockholm, wastewater is treated and reused for district heating and cooling. The sludge from the wastewater is converted into biogas. At the national level, Sweden has passed legislation that makes the producers responsible for the disposal of their products. The US now has this for computers but in Sweden it applies to all products. For example, drink manufacturers pay for the costs associated with recycling bottles and cans. Residents sort their waste in receptacles located outside between buildings. In Hammarby Sjöstad, garbage, glass, and food waste have their own receptacle. 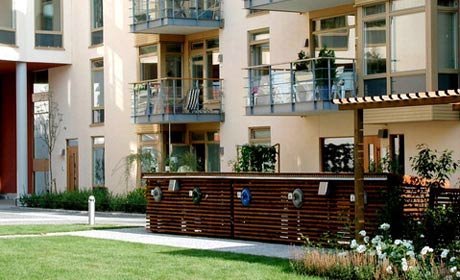 The receptacles are connected to an underground vacuum tube system that collects all of the waste automatically at a central location for pickup. This system of mechanized collection means that a fleet of garbage trucks is not needed to travel to each building collecting waste, allowing for narrower streets and fewer greenhouse gas emissions.

icity to feed back into the grid. These plants have advanced scrubbers to ensure harmful gases do not escape into the atmosphere. Glass is recycled and food waste is taken to a biodigester where it is converted into biogas to power the city’s bus fleet. Residents of Augustenborg project in Malmo go even further, sorting waste into 13 different fractions. 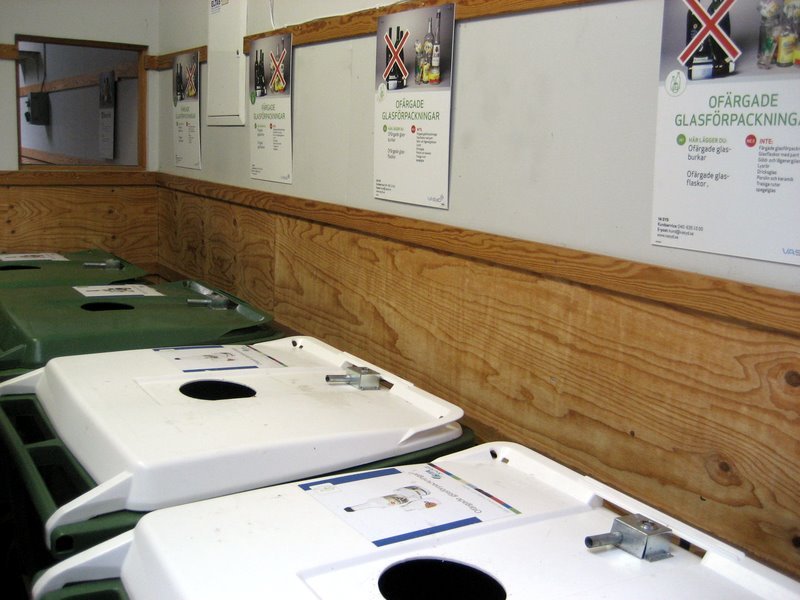 Reciprocals are located so that no resident has to walk more than 100 meters to deposit their waste. As in Stockholm, food waste is used for biogas production. The neighborhood has a large campaign to educate residents on the proper way to sort waste, going so far as to install a bag holder for the compost in each apartment so residents would be more inclined to compost. This resulted in a 70% increase in composting. Planners also make attempts to repurpose existing buildings when designing new developments. These efforts are made to prevent that loss of the energy used to build the existing stucture (known as embodied energy) The site of the Royal Seaport development was originally used as a gasworks, a gas manufacuring facility. Two of the orginal gas tanks will be cleaned up and modified to house opera houses. 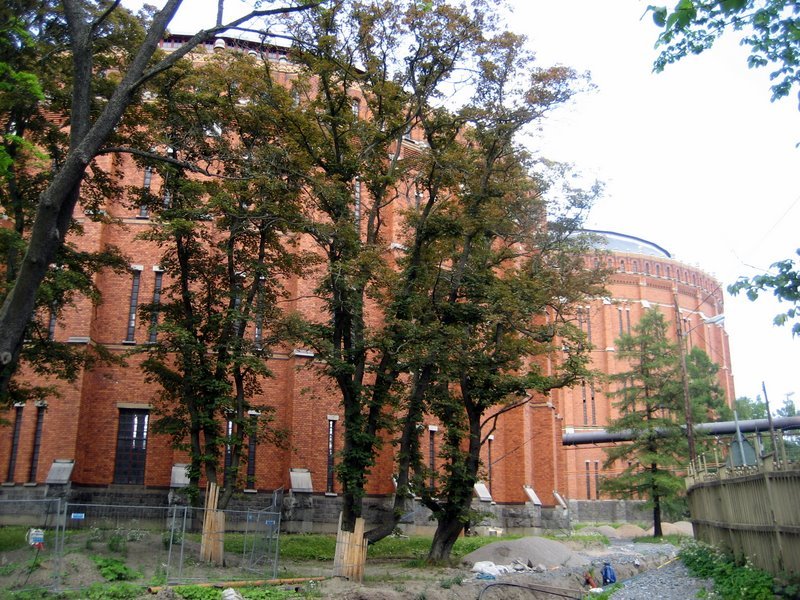 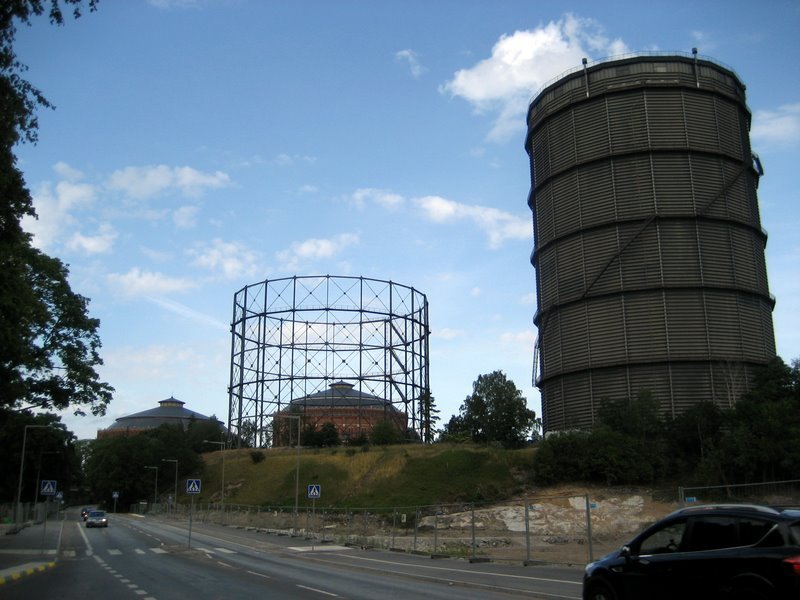 These are just a few of the ways cities like Stockholm and Malmo are striving to make their new developments more sustainable. I’ll get another post up in the next day highlighting two other strategies I found particularly interesting (green roofs and storm-water runoff management).

And one last parting shot from Stockholm. 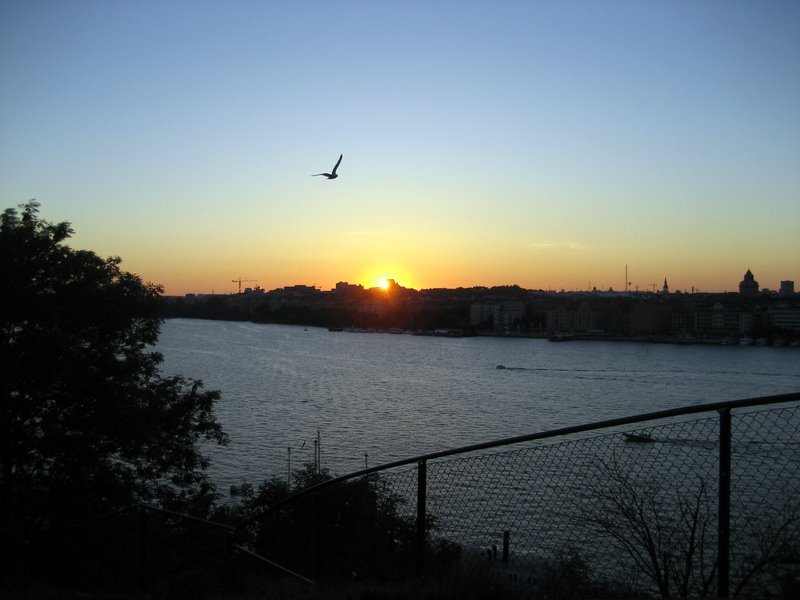