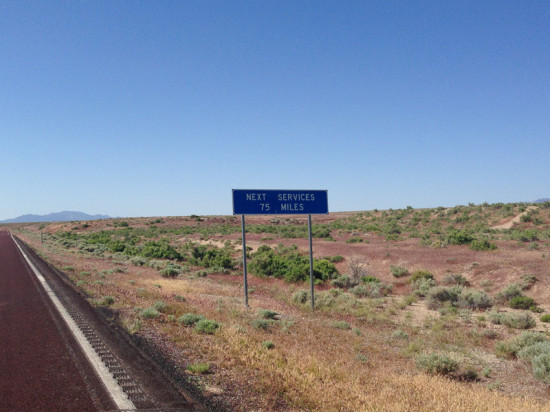 Five miles southeast of Baker, I crossed into Utah and pushed 83 miles through Mormon Gap and over 3,750 feet of summits to the town of Milford. Milford to Cedar City was another tough day due to scattered thunderstorms and strong winds. It seemed as if I would get soaked for sure, but somehow I avoided the major cells and just got spitted on a few times. In anticipation for the big climb to Cedar Breaks National Monument, I used a rest day in Cedar City to mark the two-week point of my trip and recharge my batteries. 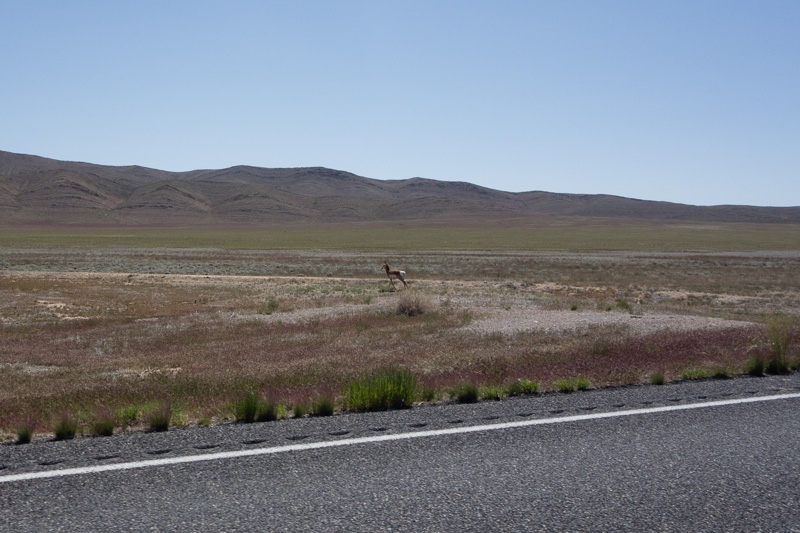 One of many Pronghorn Antelope 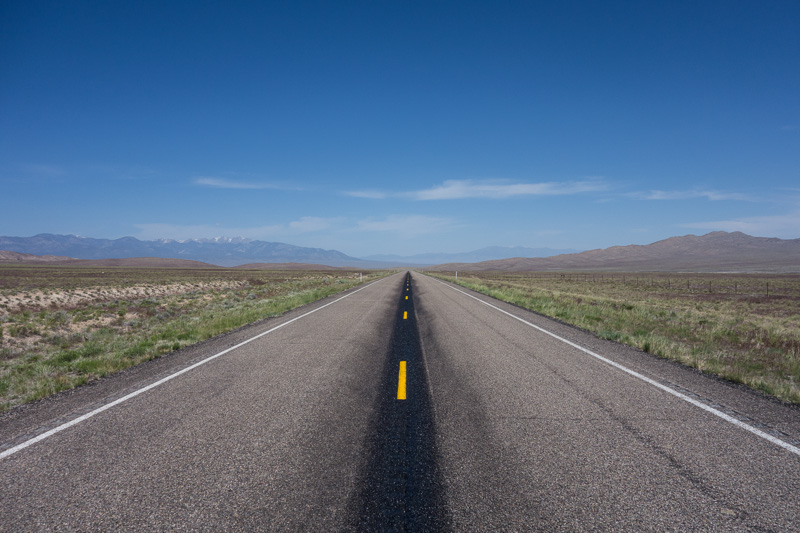 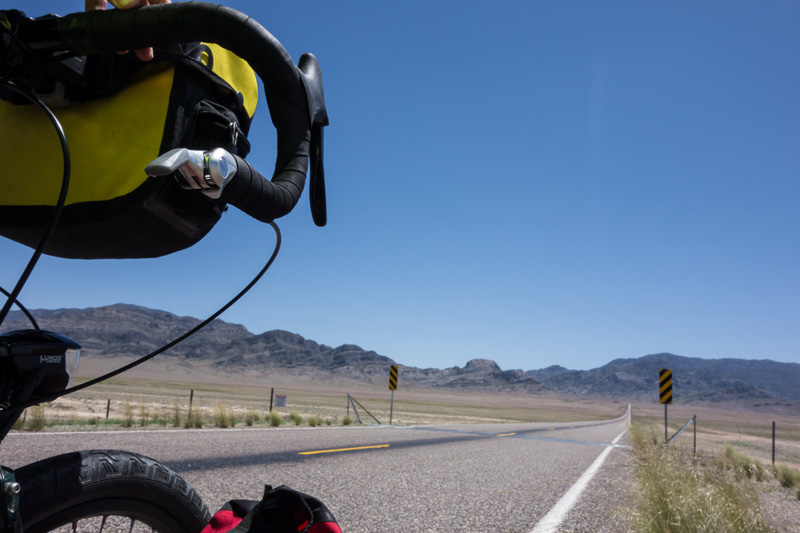 The climb to Cedar Breaks National Monument was spectacular. I followed HWY 16 through groves of aspen and bristlecone pine trees all while catching glimpses of the shale, limestone and sandstone formations far above. I eventually lost sight of the cliffs as I passed over a saddle and began the final climb along a ridge to the park entrance. The terrain finally flattened out and I passed through numerous alpine meadows before coming to the first vista. The amphitheater is three miles across and dramatically drops 2,000 feet away from the edge of the ridge. The wind was howling so I snapped a few pictures and kept on riding. From there, it was almost all downhill on a gorgeous Forest Service road to Duck Creek Village. I spent that night at a campground amidst the aspen trees. 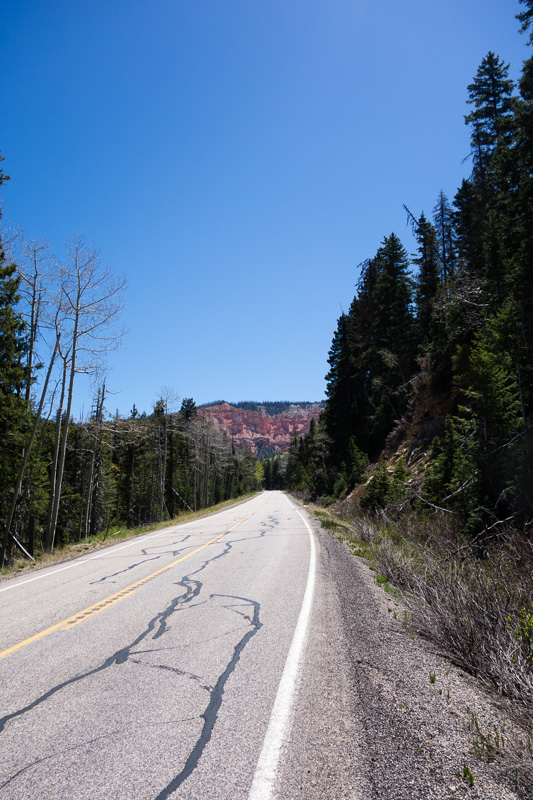 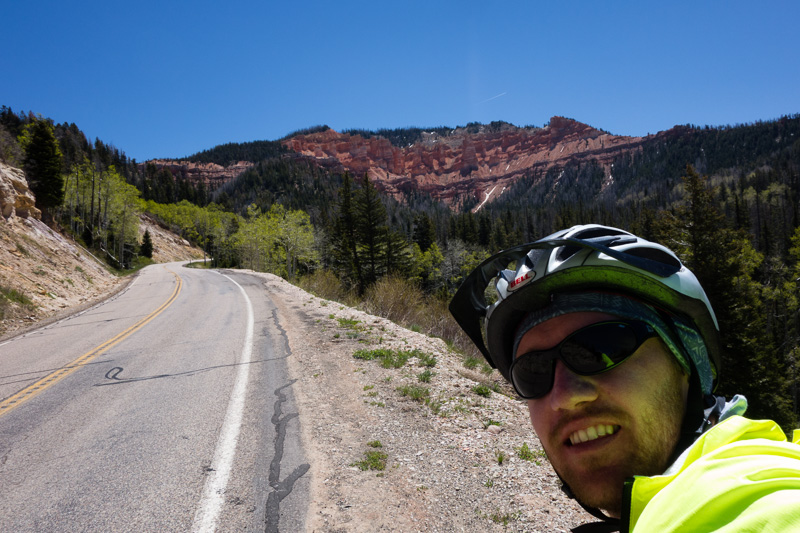 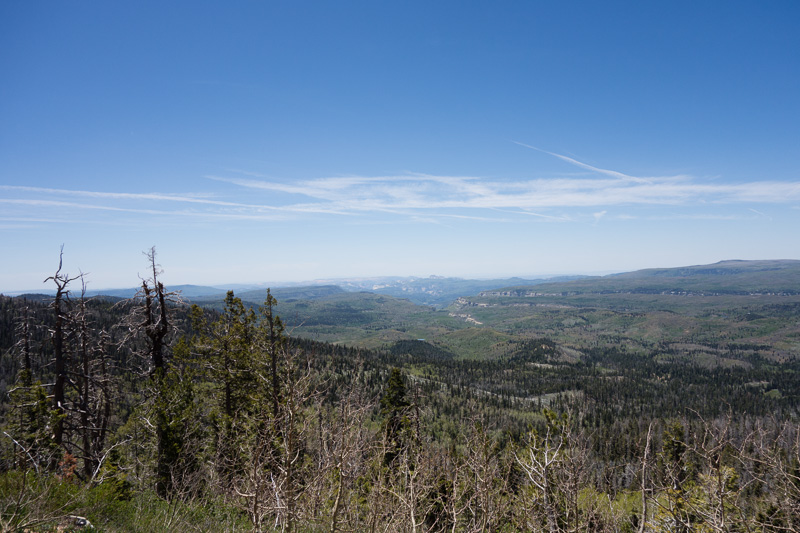 Looking south towards Zion National Park from the Markagunt Plateau 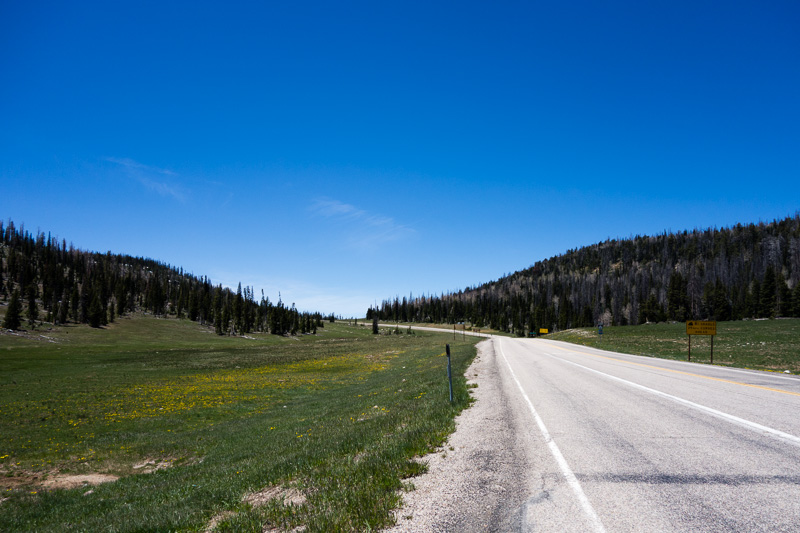 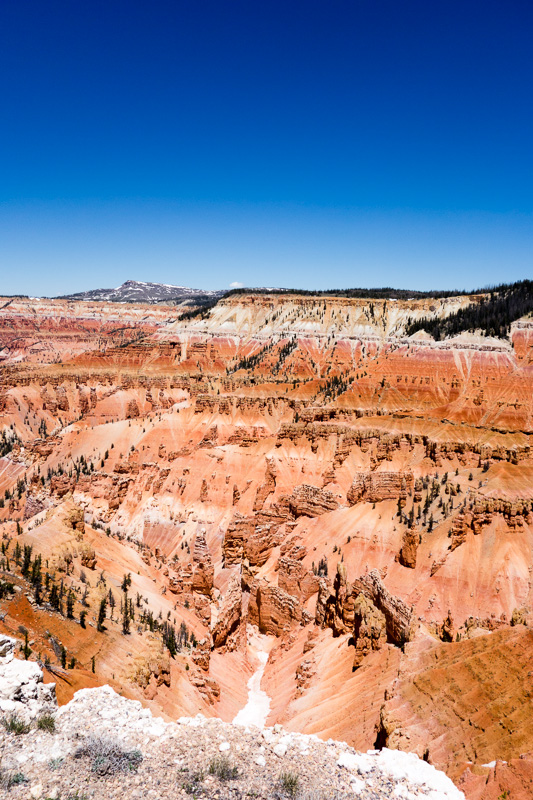 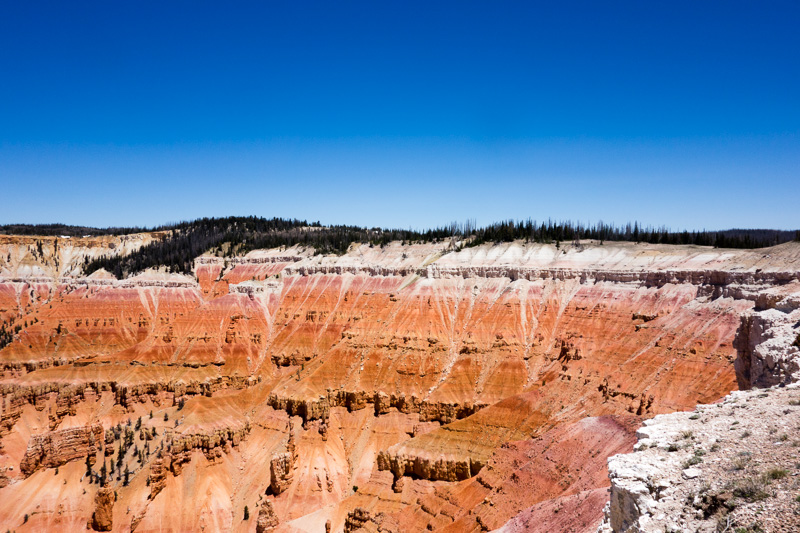 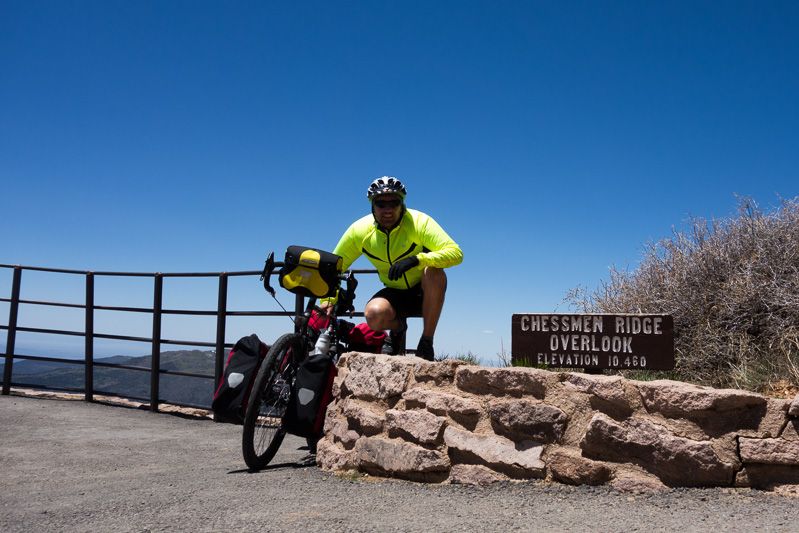 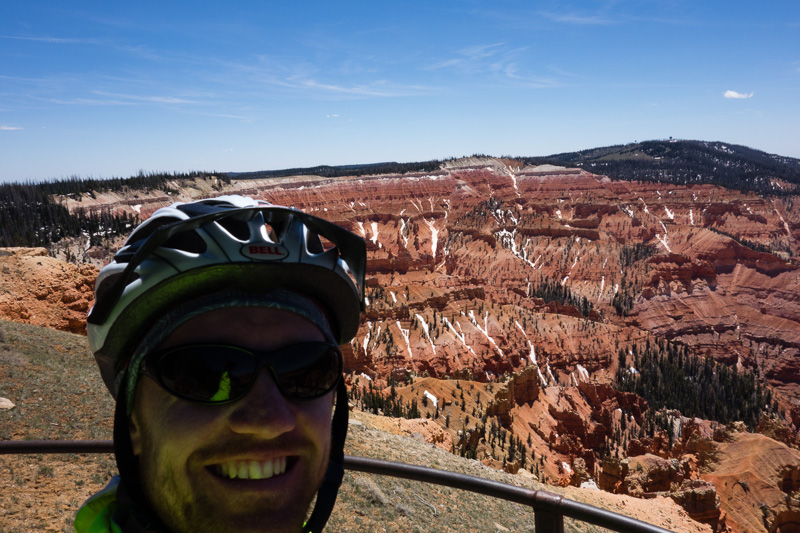 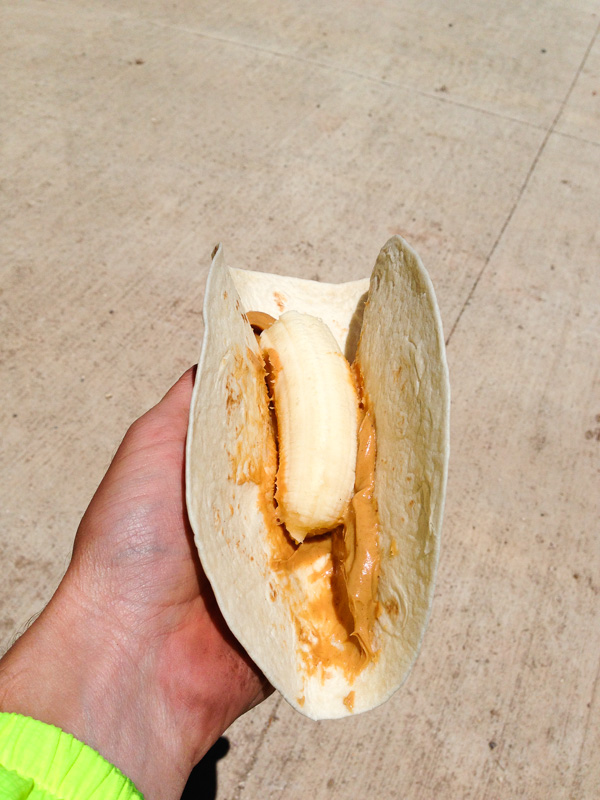 The next morning, I woke up early in anticipation for my ride into Zion National Park via an unconventional dirt road descent from Duck Creek. ACA sold me on the route with descriptions like “memorable 16 mile descent”, “you’ll possibly encounter some bad washboard, so pick your line carefully (and try keeping your eyes on the road despite the incredible views)”, “beautiful canyon surroundings!” and “unforgettable downhill run”. I was convinced as soon as I read “bad washboard”! The descent definitely had its fair share of that and then some. Once I passed Navajo Lake, I turned left onto North Fork Road and began to descend. Soon, I was crouching out of the saddle, pumping the brakes and picking my line through all sorts of road conditions. After a few miles, the road started to parallel the North Fork of the Virgin River near its headwaters and the slope steepened. The canyon walls rose on either side of me. I really had to take my time since Toby doesn’t have any suspension. Every 15 minutes or so I would take a break to stretch my hands and let the brake pads cool. It would have been a blast on a downhill mountain bike! Thankfully, there were no flats or mishaps since I only saw three cars total on the whole stretch. 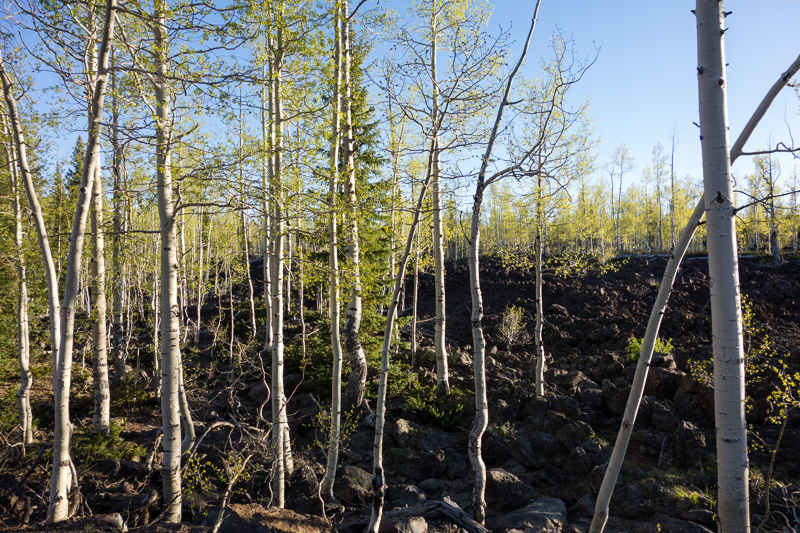 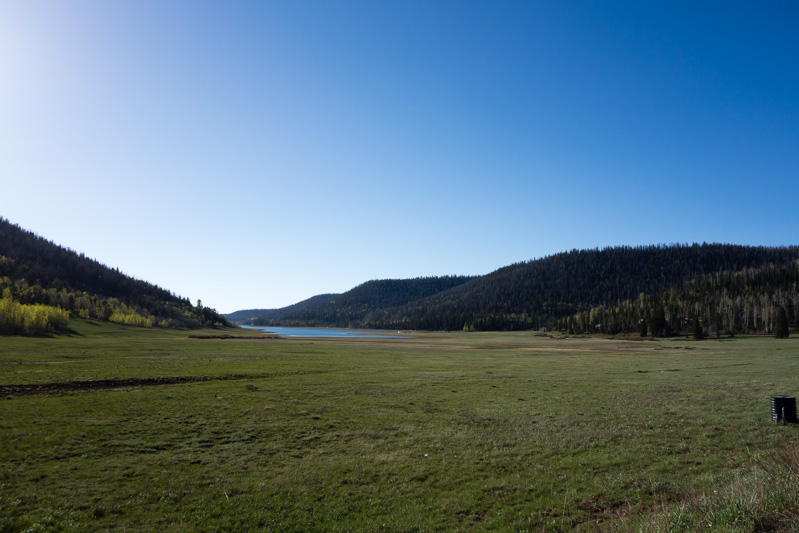 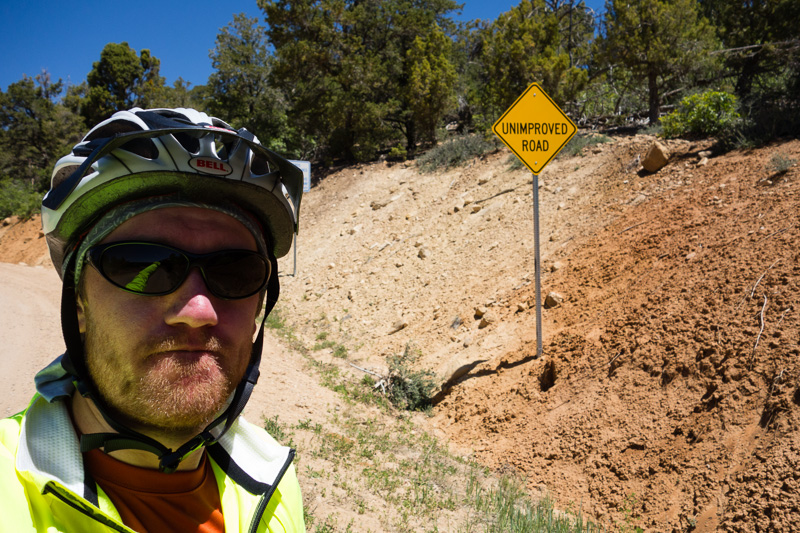 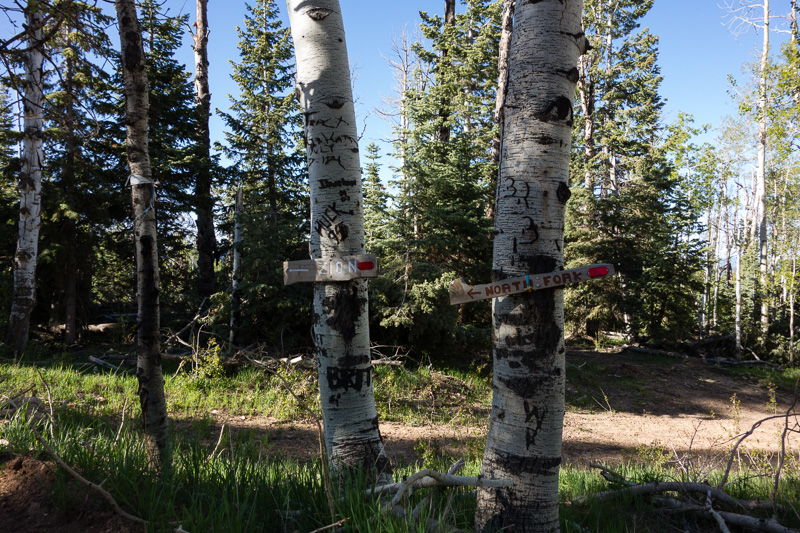 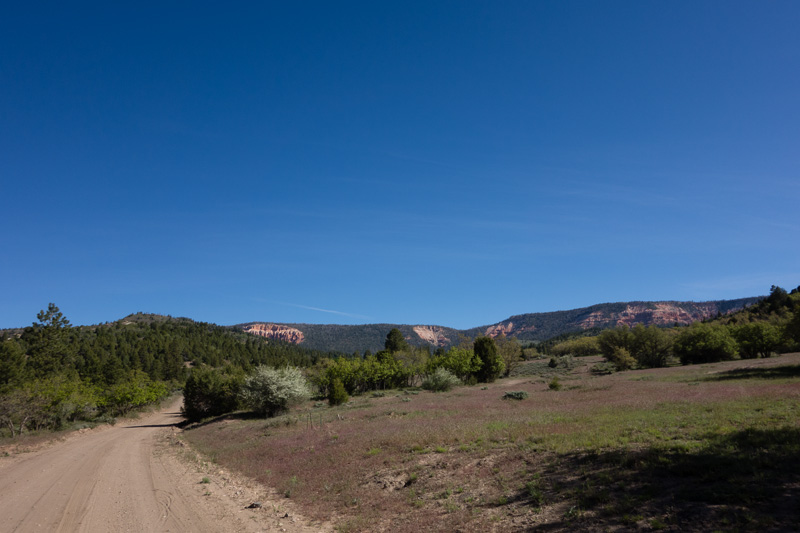 As the road began to level out, I crossed the river one last time and began to climb up and out of the canyon. Soon, I could clearly see the backside of Zion NP getting closer with each turn of the pedals. As I turned slightly away from the park, the dirt turned to pavement and I cruised down to a restaurant to eat lunch. I hardly had to pedal the rest of the day as I descended into Zion Canyon from the east entrance. It was jaw-droppingly beautiful — dramatic cliffs, slick rock faces, narrow slot canyons and diverse plant life was all around me. I made it down to Watchman Campground by mid-afternoon and the ranger found me spot for the night. The town of Springdale sits at the south entrance to the park, about 1 mile from the campgrounds. I rolled down to do laundry, replace my campstove (opted for an MSR Superfly instead of a replacement Dragonfly), eat a big dinner and make sure Toby was is good shape after his rough descent. It felt good to know I wouldn’t be riding on Saturday. 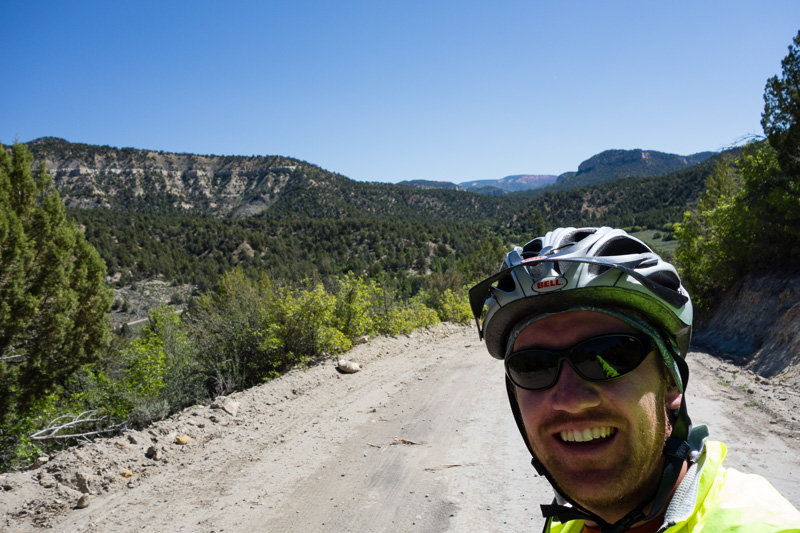 Climbing out of the Virgin River Canyon 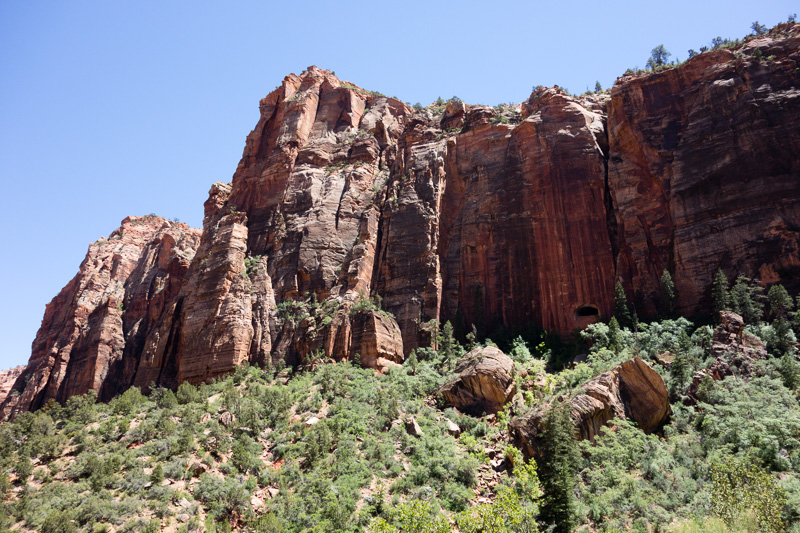 Zion – Mt. Carmel Tunnel is in the mountain. You can just make out one of the tunnel’s windows. 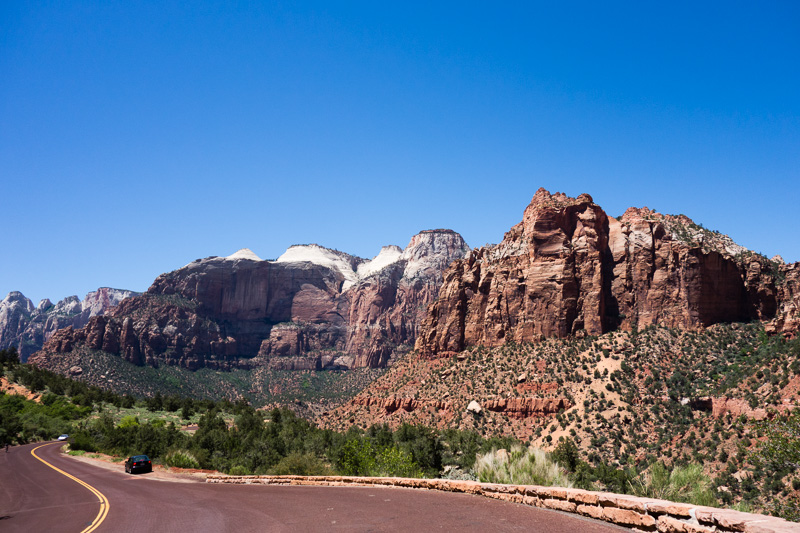 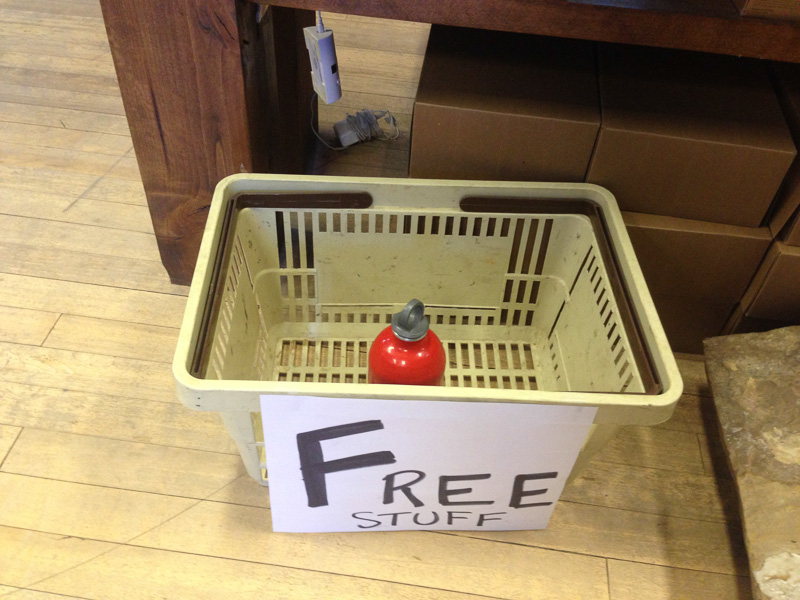 Jettisoning my fuel bottle after upgrading to a canister stove

After moving my gear to South Campground for night two, I rode Toby to the canyon shuttle stop and loaded him on the bus’s bike rack. My goal for the morning was to hike Angel’s Landing before the hoards arrived and the heat intensified. The shuttle whisked Toby and I up the canyon and dropped us at the Grotto trailhead. I locked Toby to a rack (even though he really wanted to come with) and crossed the N. Fork of the Virgin River. I immediately began climbing up an impressively-built trail that hugged the rock-face. The path soon leveled off and entered complete shade in a narrow slot canyon named Refrigerator Canyon. Then, I zigged-and-zagged up a series of 21 steep switchbacks called Walter’s Wiggles (named for the first curator of the park and designer of the trail). From there, the trail to Angel’s Landing follows a narrow ridge (only a few feet wide at times) to a peak that juts out into the canyon. The path requires scrambling over rocks and clutching a thick chain for reassurance as you edge further out along the knife’s edge. On either side of the path, the ridge drops all the way to the canyon floor, 1,488 feet below. The view was well-worth the strenuous climb! I booked it down the mountain back to Toby and coasted downhill through cottonwood trees to the campground. 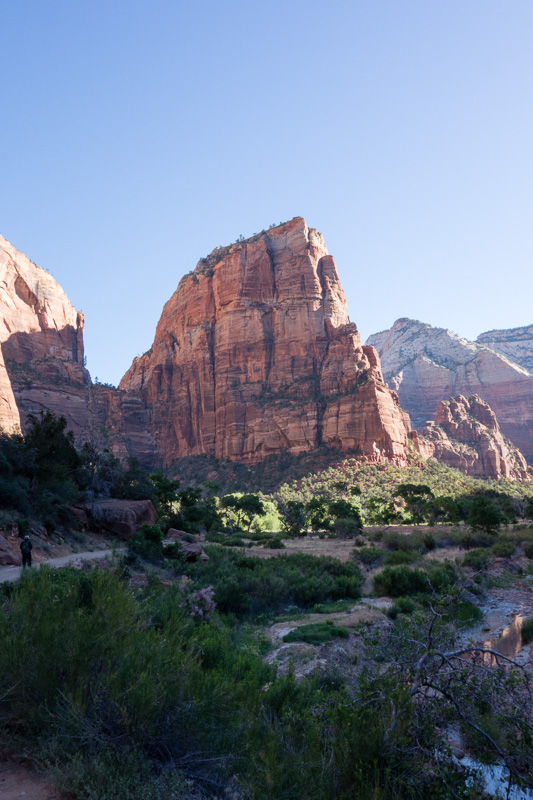 Angel’s Landing from the canyon floor 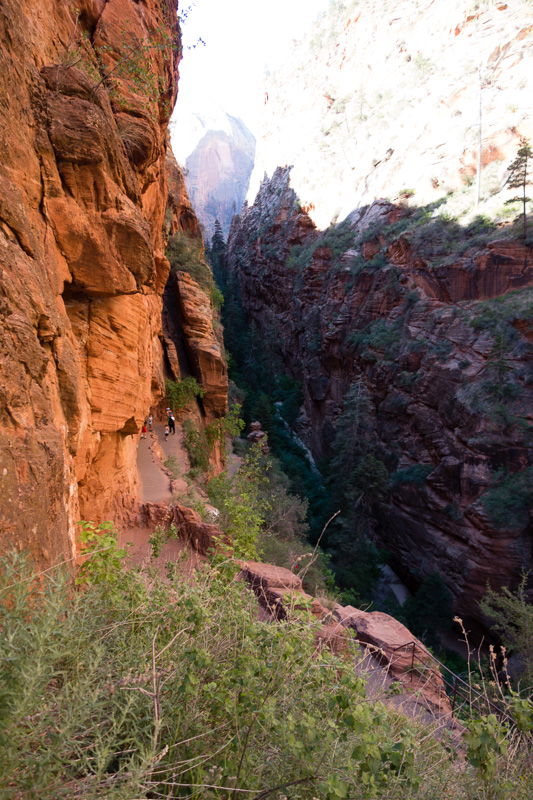 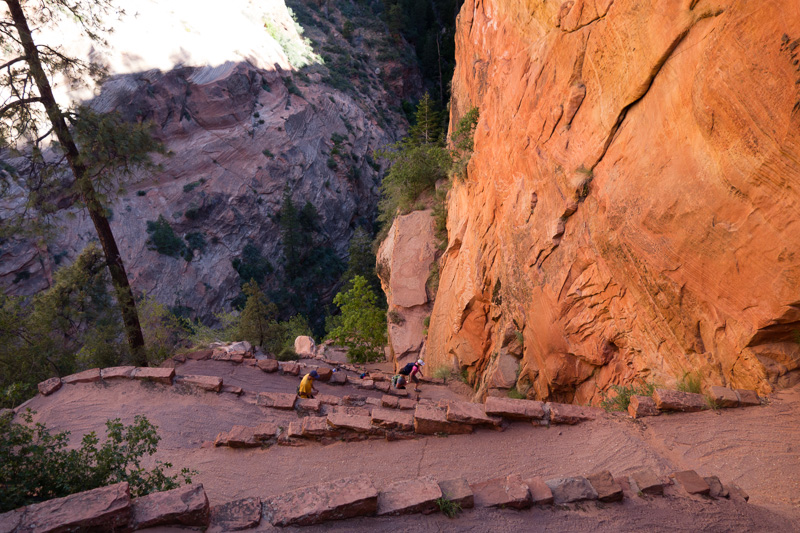 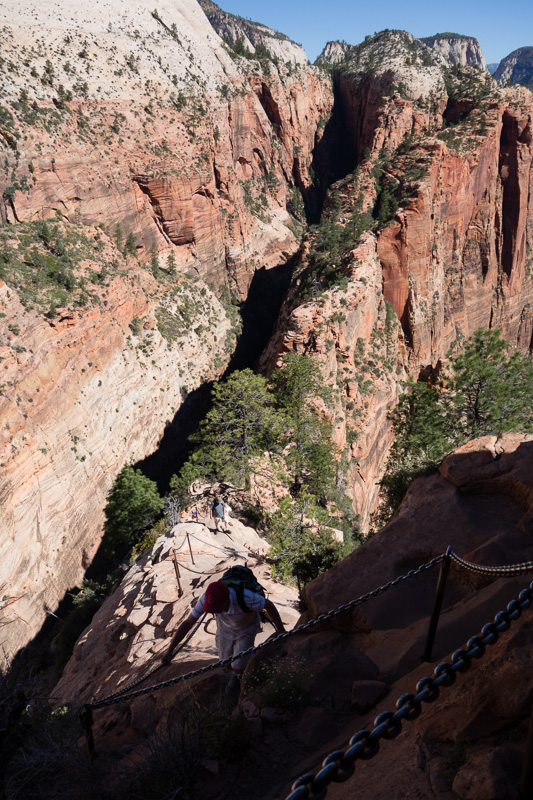 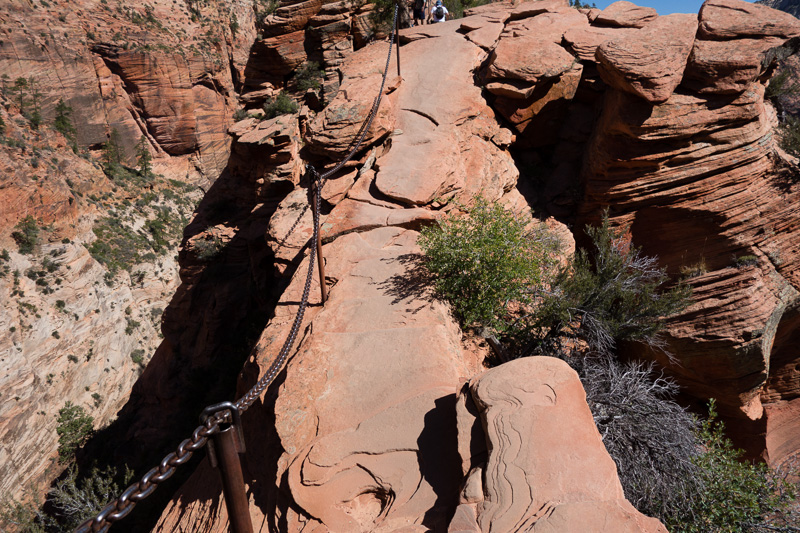 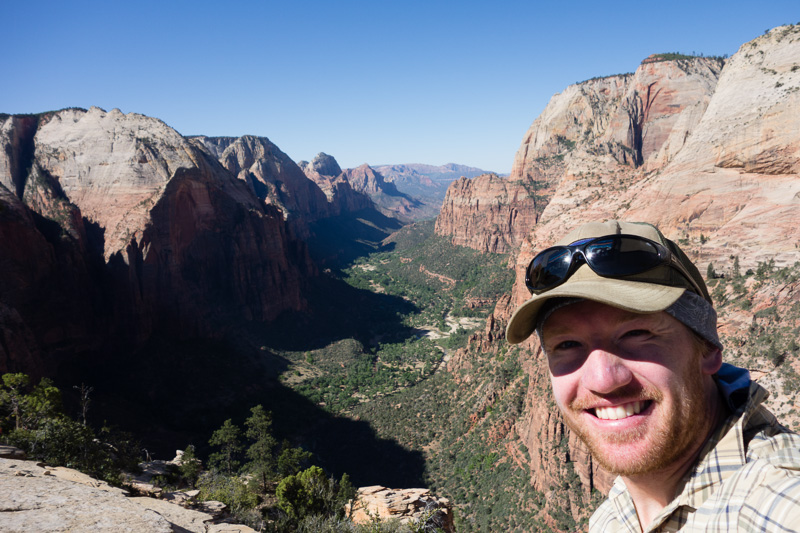 From the top of Angel’s Landing 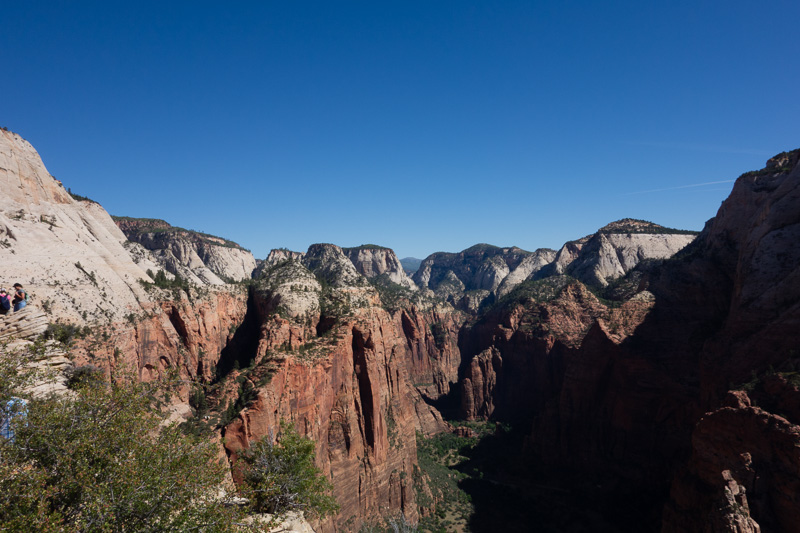 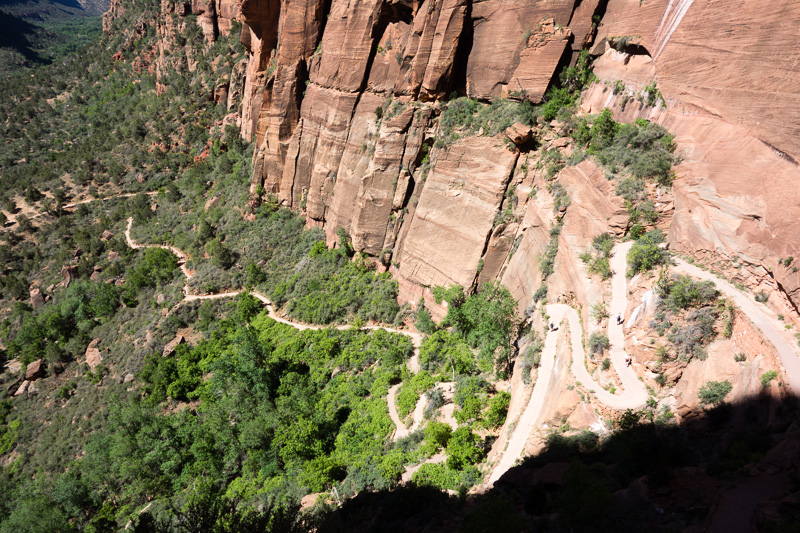 After lunch, I hopped on the shuttle back up the canyon to the Narrows. The Narrows is a section of canyon on the North Fork of the Virgin River (the same river I followed from Navajo Lake). Since I didn’t have enough time to through-hike the entire Narrows, I opted for the “bottom-up” approach, hiking upstream for a few miles from the shuttle stop. It was fun (and cool) tramping through the river but there were loads of people and the gorge never got as narrow as I hoped. I’ll hike the whole thing when I return to Zion!

On Sunday morning, I headed out of the park the same way I came in. My destination for the day: Jacob Lake, Arizona. After five miles of climbing, I reached the entrance to Zion-Mt. Carmel Tunnel. The tunnel is too narrow and dark for bicyclists to safely pass so I waited with the ranger for a kind soul in a truck or RV to give me a lift. It turned out to be an RV loaded with a California family on their way to Utah to drop off two of the kids for their Mormon mission. I asked for a lift to the edge of the park since I had a big day ahead of me, including a steep 3,000 foot climb in the final 20 miles. The mother graciously agreed and even took me a bit further to Mt. Carmel Junction, where our paths diverged. Getting a little help was the right call because I underestimated the climb and the amount of water I needed. Completely exhausted, I limped into Jacob Lake almost 10 hours after I left Zion. Even though I cheated a bit with the RV ride, I had completed the climb, made it to another state (AZ) and was within one day’s ride of the North Rim!